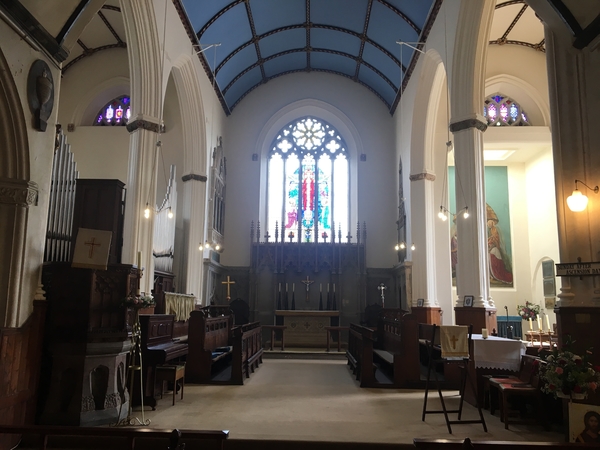 UPDATE JUNE 2018
We have completed all the external and internal works that were specified for the second phase of repairs, and more besides on the roof, which has alleviated the majority of the internal leaks for the future.

As ever, the fabric of St Thomas threw up many queries and unexpected problems to be solved/worked around; is there anyone who remembers the heater in the North Aisle (the asbestos lined flue was discovered in the re-roofing of the North Aisle)?
Similarly, does anyone have memories of works undertaken in the 1950s/60s (likely to have been post war) that involved concrete wall plates and new plasterboard ceilings for the main Nave and some of the South Aisle?

A big thank you to the Conservation team that Sally Strachey Historic Conservation Ltd put together to undertake the works. Elements of the fabric that had looked perilously close to collapse in recent years have all been restored to original glory. The care and attention they paid to the fabric was second to none, and much appreciated by all who were closely involved with the process.

An equivalent thank you to all those who have contributed financially; the HLF, Viridor, National Churches Trust, Garfield Weston, Devon Historic Churches, ChurchCare.
The success of the previous 2 phases has been used to encourage other applications to such grant funds. St Thomas appeared as an example on the recent national roadshow undertaken by the N.C.T in partnership with the HLF. It's a comfort to know that we are still on the radar of the grant giving bodies as we move towards the final phase of the repairs, anticipating a completion of the overall project in 2022, nearly 10 years after the journey began.

The church is once again open on a daily basis, and in the Summer months is the perfect place to find some coolness and quietness. Do come in to sit and enjoy the beautifully repaired East end, which is brought to life with the sun streaming in through the repaired and cleaned stained glass windows.

Although the work for the second phase has been completed, we still need to raise a significant amount of money to complete the project of restoring a beautiful building in the heart of St Thomas. If you would like to donate towards the project then please contact Philip Baker c/o St Thomas Church Hall, Church Road, Exeter EX2 9BQ or ring 01392 437486.